What is Markham MUN?

Throughout the two days of the conference, 450 high school students will be deliberating on issues adapted from the agenda of the United Nations and its partner regional bodies, centred on our 2018 theme of "Tackling Security, Development and Societal Obstacles to Sustainable Development", in fourteen committees. They will role-play senior UN diplomats to debate on issues that remain primarily unresolved in the international arena.

This event will offer delegates the opportunity to develop a series of skills that will serve them in the academic ambit and beyond, including but not limited to public speaking, leadership, negotiation, consensus-building, researching, writing and creativity while developing a deeper understanding of the United Nations and multilateral diplomacy.

Balance between competitiveness and diplomatic spirit

At the core of the Markham philosophy is the belief that competitiveness and diplomacy are, in fact, compatible with each other. At Harvard MUN 2018, we made it our goal to play clean and give our best and won the Best International Delegation. The entire team that brought this award home is organising Markham MUN 2018. While we will do our best to promote academic excellence and make their best efforts to develop as delegates and human beings, we will carefully supervise and not tolerate any act of unfair competition.

A deeper understanding of the United Nations and multilateral diplomacy

At Markham, we value the genuine nature of our educational experience. Our theme of "Tackling Security, Development and Societal Obstacles to Sustainable Development" is aligned with the United Nations' current Sustainable Development agenda and the topics of every committee have been carefully adapted from the current agenda of the United Nations and its partner regional bodies. This one-of-its-kind experience in Peru will enable our delegates to deliberate on serious yet fascinating issues that high-ranking UN diplomats have left under-addressed. Love for Model United Nations does not go any further.

A platform to excel in

At Markham, our focus is the development of our 450 delegates, both as MUNers and as human beings. Therefore, we selected 50 of Markham and Peru's most renowned Chairs to facilitate committee proceedings. Our 1:9 Chair-to-delegate ratio will enable the close evaluation of every delegate's progress. Finally, our average of 32 delegates per committee will ensure that all of them have the opportunity to showcase their skills regularly.

At Markham, we want to make every moment of our conference memorable and help delegates react to real-life difficulties diplomats continuously face outside the comfort of the United Nations. Therefore, our team of Chairs will be crafting realistic crisis updates for every committee -regardless of whether they follow crisis style or traditional MUN rules of procedure - to direct the flow of debate towards the critical issues and offer a fun, realistic and academically challenging event.

At Markham, we strive to provide our best and most updated technology to facilitate debate in each committee and highlight the pivotal role technology has to play in achieving the Sustainable Development Goals. Additionally, our two-hour social event and extended breaks will provide delegates with an opportunity to meet like-minded peers and add fun to the learning experience.

Markham MUN does not put a price tag on education. Our Senior Secretariat team works arduously to collect funds and use them efficiently so as not to require delegations to pay any registration fees and to maximise the amount of money donated to our partner, UNICEF Perú. 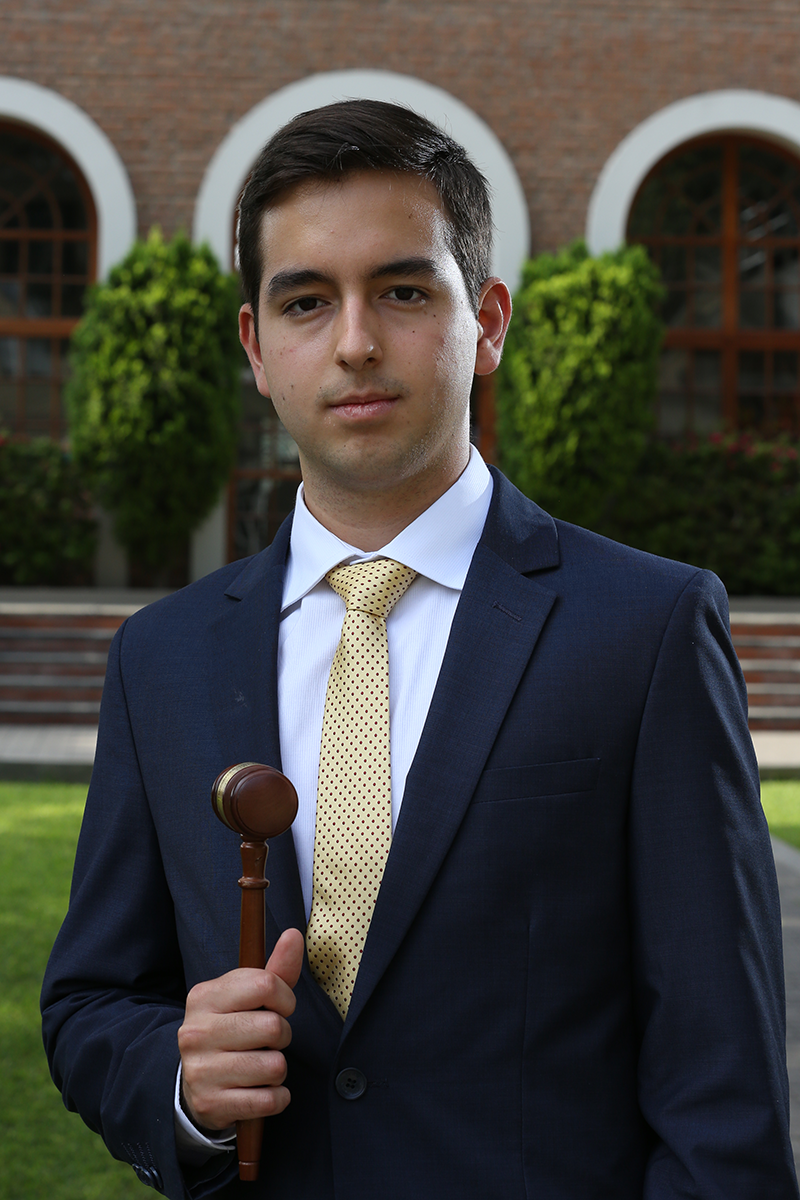 Philippe Chabaneix is a Peruvian, IB Diploma Programme student at Markham College who plans to study Government and Economics.

He has been heavily involved in Model United Nations since he joined the Markham MUN team for Villa Maria MUN 2015. At Markham, he served as a member of the Secretariat, Deputy Secretary-General and Head Delegate. As Head Delegate this year, he trained the 100% student-led Markham team that won the Best International Delegation at its first appearance Harvard MUN 2018. He also won the Best Delegate award in his committee at Harvard MUN.

He has also represented Peru at four Model UN conferences in the United States with United Schools of Peru.

Furthermore, he co-trained 60 high school delegates new to MUN in Dubai last November and was the Director of the Security Council at the United Ambassadors MUN Conference (UA-MUNC) in Geneva last May. This April, he returned to UA-MUNC Geneva, serving as Under-Secretary-General for the Department of General Assembly Affairs and Conference Management.

Philippe is convinced of the life-changing power of Model United Nations, for which he lives and breathes MUN to bring it to as many people as possible.

In his free time not consumed by MUN, he enjoys playing volleyball and reading on diplomacy and historical fiction.

He is thrilled to serve as Secretary-General this year and to welcome you to Markham MUN 2018. 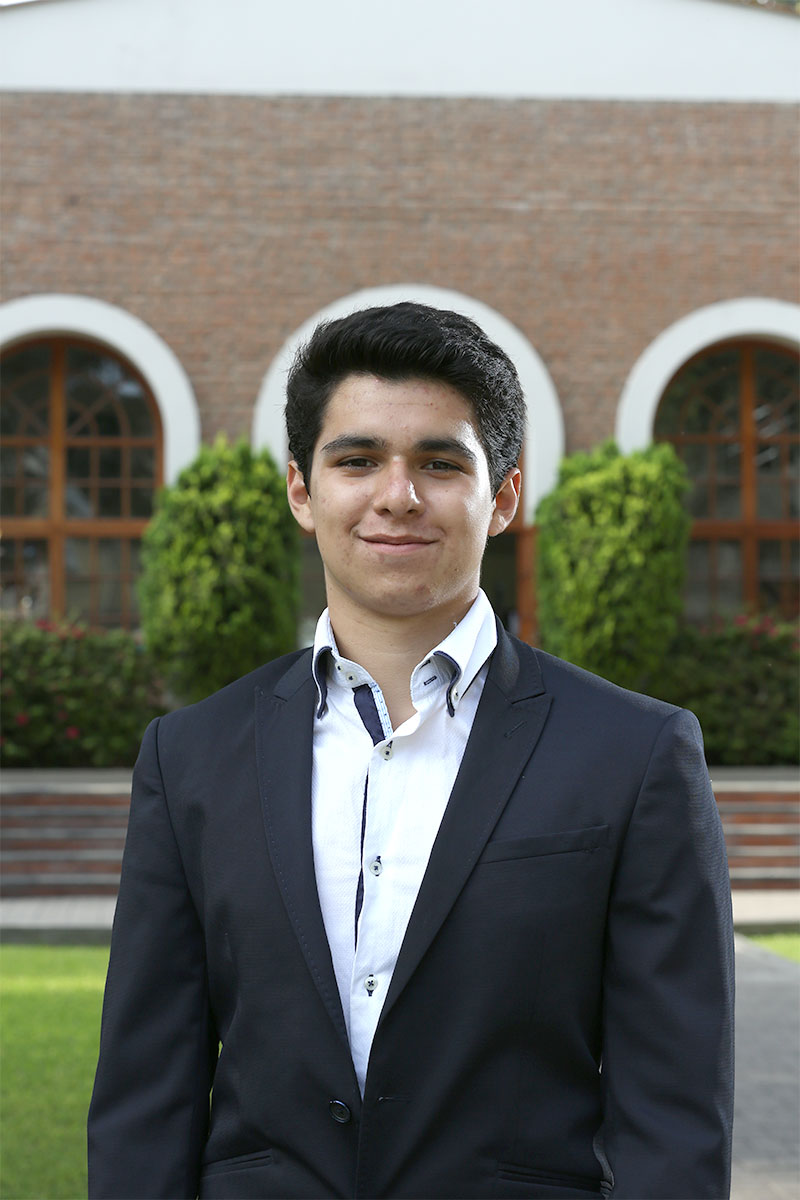 Braulio Mourao is extremely excited for this year’s conference! He is an IB student at Markham College and likes to think of himself as a person who loves doing everything, even the things outside of his comfort zone.

He began attending MUN in 2015 when he decided to try it out with a group of friends, without knowing that they would end up running their own conference in the future.

Braulio believes that Model UN is an incredible activity, which provides delegates with so much more than just debating, public speaking and negotiation skills: it helps them learn about ethical decisions, modern international conflict, how to manage groups of people. These are only some of the few advantages that MUN provides.

He hopes that our Model UN team can help every delegate’s experience be an unforgettable one. He thanks you for attending Markham MUN 2018! 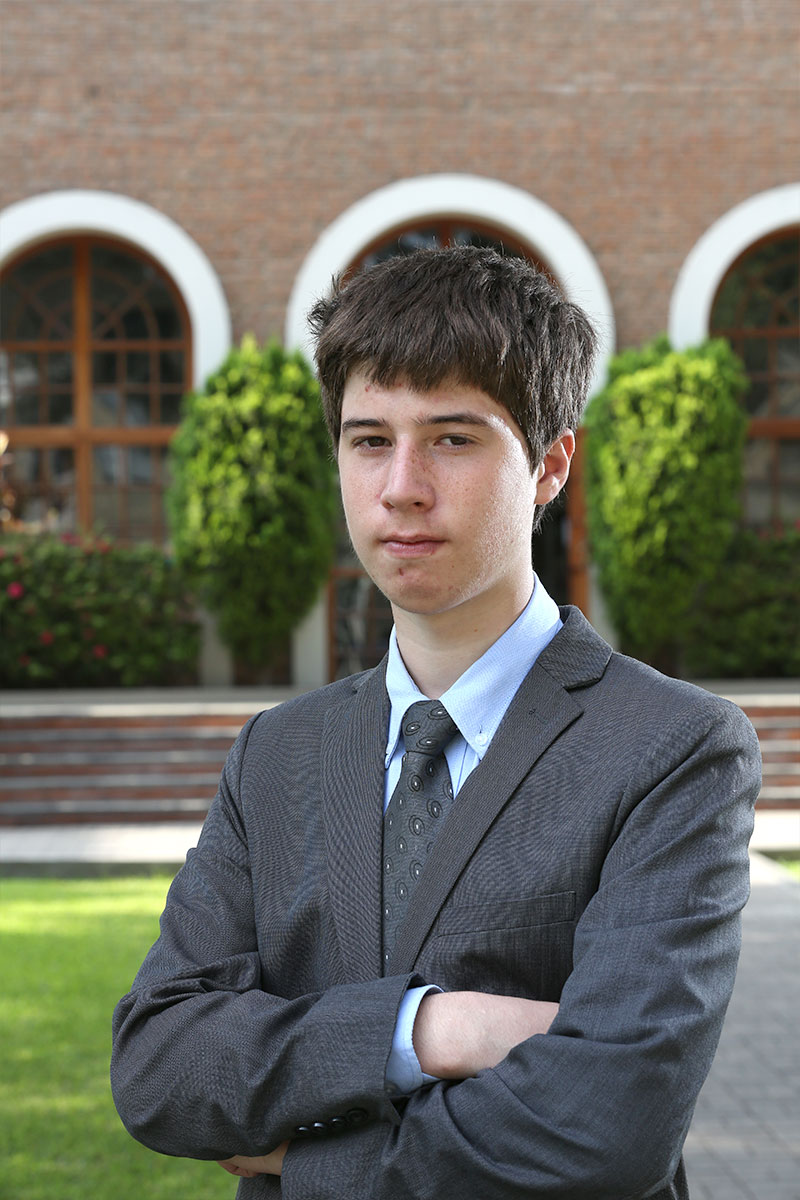 Alexander Scott is a student at Markham College, who is currently in the final year of the IGCSE programme. He is deeply passionate in music, public speaking and fantasy books, and enjoys a deep talk regarding science, video games or "The Lord of the Rings".

He started his MUN career in 2016, attending his first committee at San Silvestre School, discussing Tax Havens in the Economic and Social Committee (ECOSOC) and was fascinated by the UN Simulation and what it had to offer, as well as the public speaking involved.

Ever since, he has been sure to attend all MUN Conferences at his grasp, learning about fascinating topics and meeting new people in every committee.

In January 2018, he attended his first international conference, Harvard MUN, where he discussed LGBT+ Rights and formed part of the team that won the Best International Delegation award there. He enormously enjoyed Markham's teamwork and preparation.

He plans to study Astrophysics in the United States, in hopes of discovering more about the universe and the way it works, and to one day understand the laws that govern our existence, and how they came to be.

Under-Secretary-General for the Economic and Social Council
alexander.scott@students.markham.edu.pe 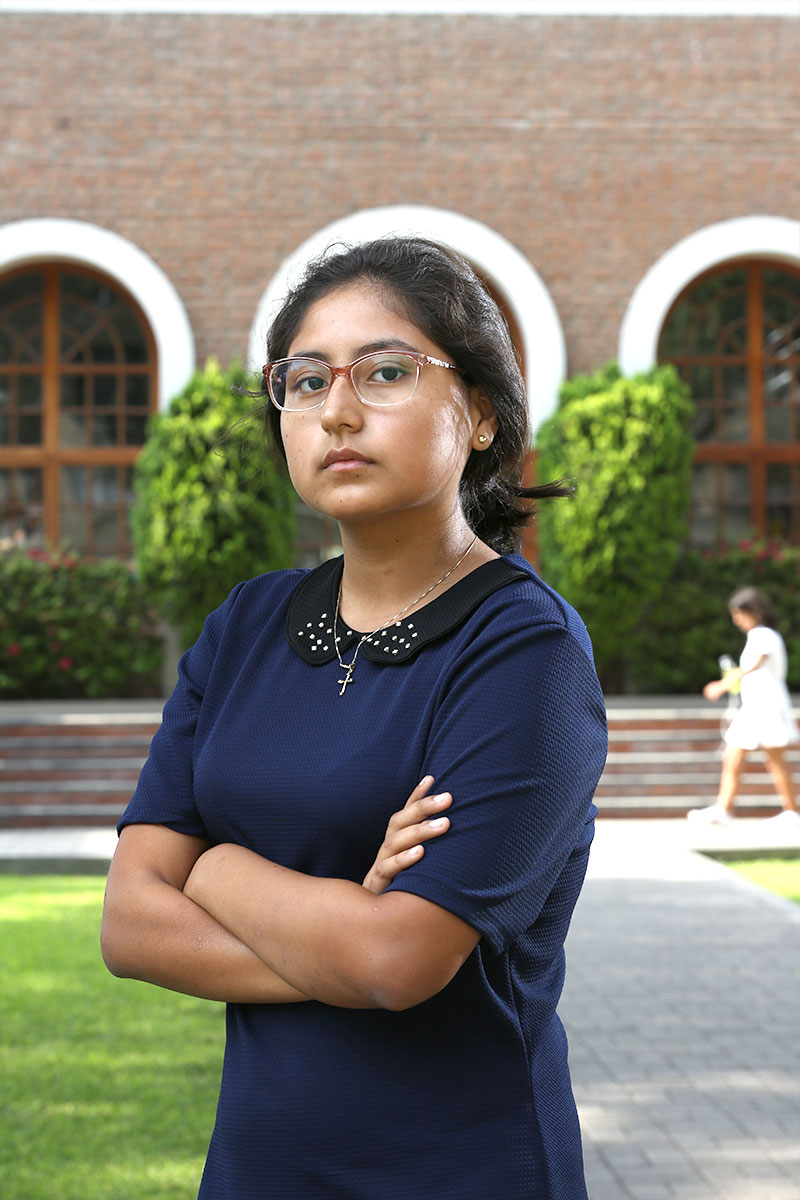 Andrea Quispe is an IGCSE student at Markham College who will be taking on the role of co-Under-Secretary General for the Economic and Social Council.

Before assuming this role, she had the pleasure to participate in numerous conferences since her MUN career began in 2016.

At her first appearance at an international conference, in Harvard MUN 2018, Andrea won the Verbal Commendation award in her committee, debating "Access to Opioids". She also formed part of the team that won the Best International Delegation Award at Harvard MUN 2018.

Education - her favourite Model UN topic - has had a profound impact on Andrea and is currently her main priority, both at the personal and community level.

She has had many opportunities to develop her teaching and communication skills, which is why she hopes to help all delegates achieve their full potential at the conference and enjoy being a part of our quest for a better future with education for all.

Andrea is keen to meet all delegates with a persevering attitude and a desire to change the world.

Andrea is thrilled to be acting as co-UnderSecretary-General for the Economic and Social Council.

Under-Secretary-General for the Economic and Social Council
andrea.quispe@students.markham.edu.pe

Romina Osterling joined Model UN in 2017. She came into the activity knowing nothing at all about it, but a few conferences in, she became captivated by it.

She recently returned from Harvard MUN 2018 with 7 other delegates with a historical prize in hand, along with the rest of the team.

Romina’s love for MUN is not much about winning prizes, but rather, it is more about learning more about how the world works and how fascinating the UN’s work can be.

Romina has a passion for expressing ideas and feelings through different mediums. After graduating from high school, she aims to study abroad and pursue an artistic career, maybe along the path of cinema, alongside philosophy and literature.

She is thrilled to serve as Under-Secretary-General for Regional Bodies this year. 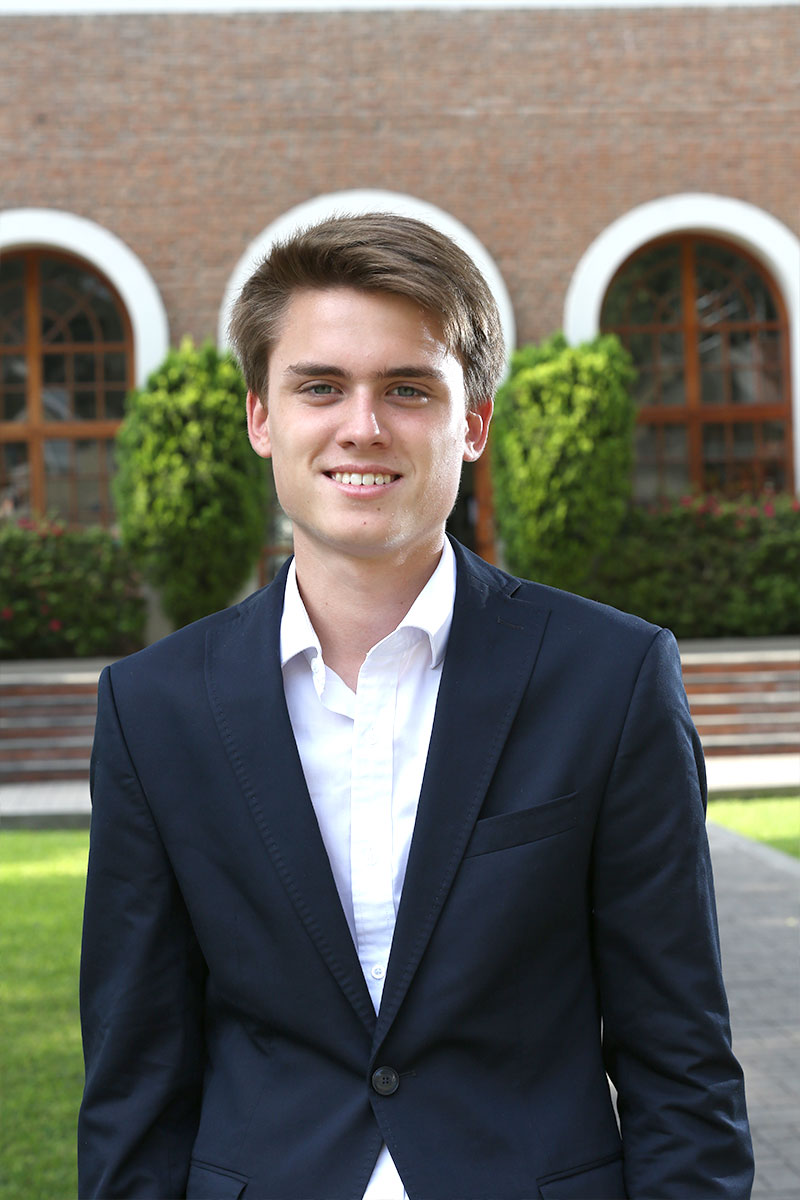 Juan Diego Du Bois is a high school student who will serve this year's Under-Secretary-General for crisis.

He is passionate for politics, theatre and series.

Juan Diego's career at Model UN began last year. He decided to be part of Model UN since some of his friends told him about it and for him it sounded interesting.

Therefore, throughout 2017, he represented Markham College in 4 local Model UN conferences and won the Verbal Commendation in his committee at Harvard MUN 2018 and formed part of the team that won the Best International Delegation award.

Finally, he plans to pursue a career related to letters and is convinced that whatever he does will be useful to serve his country: Peru. 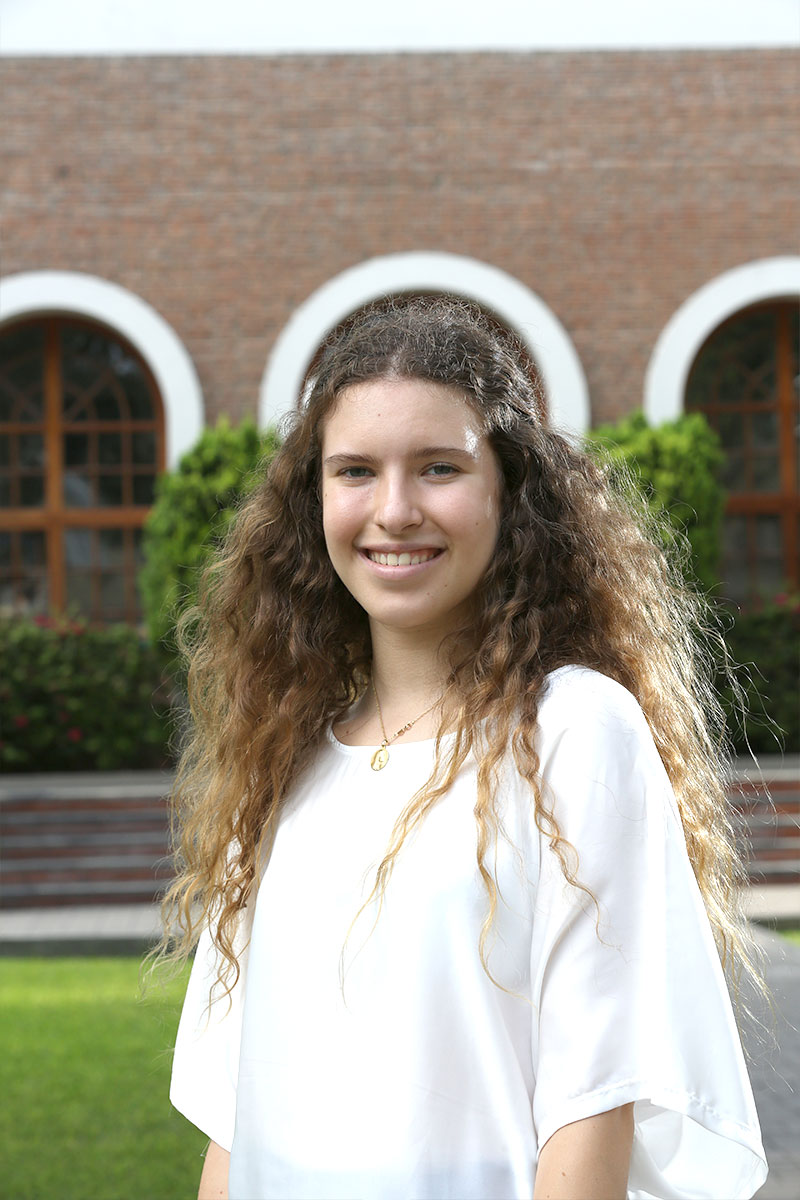 Alessandra Licetti, a Markham IB student planning to study International Law and Politics and to work for Peru's Ministry of Education, is proud to be a part of the Markham MUN Secretariat 2018. As a politics and diplomacy enthusiast, she started her MUN journey in 2015, and became a complete MUN lover ever since.

She has attended 11 Model UN conferences, which have changed her life in numerous positive ways. She also recently attended the HACIA Democracy conference organised by Harvard University, where she won the President's Award for Best Essay of the conference and the Honourable Mention in her committee. She is also the editor of ECOS magazine.

Model UN has been a fantastic opportunity for her to discuss the topics she is most passionate about, find her voice, meet incredible people and make remarkable memories.

Alessandra is an avid reader, sports lover, cinephile and rock fanatic - if you happen to like progressive rock, don't hesitate to approach her!

Alessandra has worked extremely hard along Philippe and the rest of their team in order to make Markham MUN a conference delegates will never forget. If you spot her at the conference, do not forget to say hi! Welcome to Markham MUN!